On loan from the Vancouver Museum.

Through original photographs, artifacts and sound effects, Making a Living, Making a Life depicted the experiences of people who lived and worked in British Columbia’s sawmills, shingle mills, logging camps, canneries, and manufacturing companies, from 1900 to 1994.

A lighthearted look at the marvellous machines that moved Albertans through the winter featuring winter transportation such as vintage snowmobiles, vintage automobiles, a ski plane, a Model T Snow Flyer, a 1939 Snow Sedan, antique skis and much more.

Featuring pre-1949 Alberta hot rods, this display provided visitors with examples of cars that had been slammed, dropped, and raked. All 13 vehicles displayed were high quality, completely restored and borrowed from private collectors.

A spectacular four-month display of 120 rare, vintage, exotic, and significant machines, exhibited chronologically from 1900 to 1989.

Special event weekends included Opening Day, Where Were You In ’62?, Sounds of the Sixties and a Laugh-In.

Loaned from the National Aviation Museum

This multi-media display communicated the love of aviation and flying as experienced and described by Canadian women aviators. Those profiled included pilots, flight attendants and engineers such as Marion Orr, Molly Reilly, Helen Bristol, Elsie MacGill and Rosella Bjornson. All of them are also members of Canada’s Aviation Hall of Fame.

Auto Adventure and the Mysteries of the Collection

Visitors imagined downing champagne and truffles on an Alberta wilderness expedition, saw a car made of papier-mâché, and heard about a sports car empire built with $23 million of government funding. Overall, they learned about the extraordinary stories behind the fantastic vehicles in this exhibit.

Life & Times of the Motorcycle

This exhibition told the story of motorcycling, emphasizing Alberta and Western Canada, from 1900 to 2005. More than 150 motorcycles were located throughout the entire exhibit space in modules such as "The Two-wheel Highway," "Pieces of History," "Origins," "The Early Years," "The Mechanical Workhorse," "Motorcycle Evolution," "The Early Showroom," "Trends," "My First Bike," "Motorcycle Pioneers," "Customizing," "Fashion and Safety," "Racing," "Motorcycle Advertising," "Off-Road," "Military Motorcycles," and a "Profile" of Doris Maron. Many motorcycles were on loan from their owners.

Events included a Grand Opening, Art and the Motorcycle, Motorcycles and the People Who Love Them, and the Life and Times of the Motorcycle Lecture Series.

Visitors could take home a museum catalogue of the exhibition.

Showin’ Off: Our Warehouse Rarities on Display!

In response to demand from visitors to see the “diamonds in the rust,” usually stored in the on-site warehouse, this exceptional display in a vast, 15,000-square-foot tent featured 50 of the museum’s most rare, significant, unusual and one-of-a-kind vintage cars as well as three specially selected aircraft from our renowned warehouse collection. Most vehicles were in un-restored condition, and many were very early pre-war pieces. Unlike in the warehouse, where most vehicles are stored in the dark and high on the mezzanine level, the museum display allowed visitors to get “up close and personal” with these rare machines.

The Model T: How Tin Lizzie Changed The World

With more than two dozen Model T cars (along with a Model N and a Model A), this was the largest display of its kind in western Canada. Visitors learned about the origins of the Model T and discovered why their credit rating, home design, 8-hour workday, and freedom of the open road are all courtesy of Tin Lizzie! Visitors also had fun learning how to drive a Model T in the museum theatre and had their picture taken in the You and Tin Lizzie photo parlour. They saw the Anna and Harold’s Auto Camping Adventure live presentation, played the Assembly Line Game, and were a part of the tongue-twisting Endless Chain!

Visitors could take home videos of some of the live presentations.

The museum selected 30 aircraft from its collection to tell the stories associated with aviation advances over the past 100 years. The exhibit moved through aviation history, starting with a replica of the 1909 Silver Dart and continuing with historically significant aircraft such as the Grey Gull Helicopter, Voodoo, Vampire, Haseloh Gyrocopter, Avro Arrow (full-scale model), Bristol Freighter, and a 2009 Vindicator UAV (an uncrewed vehicle drone), to name but a few! The museum’s on-site partner Canada’s Aviation Hall of Fame (CAHF) participated in this exhibit by telling the stories of some of the fascinating people who contributed to aviation in Canada, including CAHF members Wop May, Chris Hatfield and the museum’s primary benefactor, Stan Reynolds.

Visitors could get a free souvenir photo taken beside a 1928 WACO 10 GXE bi-plane in the Flying Ace Photo Parlour, make customized aviation goggles to take home or purchase a ride in an open cockpit bi-plane.

Children could complete the Passport to Powered Flight pilot’s logbook.

The Spirit of the Machine: Staff Picks

With The Spirit of the Machine: Staff Picks from the Museum’s Collections, visitors saw more than thirty rare, unusual and one-of-a-kind items of personal significance to Reynolds’ staff. Each item selected held some significant meaning to those who chose them, whether they had a fantastic story, emotional connection or just visually appealed to the individual. The staff selected items representing nearly all themes from the collection, from rusted-out wrecks to pristinely restored vehicles and from the largest agricultural pieces to some of the most delicate paper documents. The exhibit included a Chief Pontiac Statue, 1912 IHC Mogul 45, 1913 Marsh and Henthorn Donkey Engine, 1928 Elgin Street Sweeper, 1930s Hamilton aircraft float, 1934 Matchless Silver Hawk motorcycle, 1960 Imperial Crown Southampton, 1975 Bricklin SV-1, 1999 U of A/NAIT Solar Car, and more.

Luxury Cars of the Roaring Twenties

Visitors found out what made the Roaring Twenties “ROAR” after taking in this feature exhibit. This glimpse into this decade’s lifestyle included more than 25 luxury cars that reflect not only the technology but the widespread prosperity of this short, exciting era. A significant part of this display was the roll-out of the freshly restored 1918 Winton Six; other luxury cars on display included Rolls-Royce, Packard, Marmon, REO, Pierce-Arrow, Cadillac, Franklin, Rickenbacker, and Duesenberg. Some of the vehicles in this exhibition were in rough, last-used condition, offering the public a view of our collection as a study collection. Although not restored, their value lies in the stories they tell and their historical significance. Information for each vehicle was shared through photos of the original sales brochures and specifications.

Dinosaurs of the Field

Dinosaurs of the Field: Tractors That Built Alberta featured 19 of the giant gasoline-powered tractors that ruled Alberta from 1908 to 1921. Information shared for each tractor included a photo of the sales brochure specifications, a description of innovations and why each machine became extinct.

Visitors wrote a Picture Postcard to their friends and family, and we mailed them.

This feature exhibit explores the car culture of the 1950s: "Car Tunes," "Drive-Ins," "Only in Canada," "Foreign Invasion," "Aviation Influence," "Chrome Dreams: Colour and Style," and "Designer Influences: The People Behind the Designs." Of the 25 vehicles displayed, 5 were on loan. Highlights from the museum’s collection included the 1955 Chevrolet Nomad, which was freshly restored, and the 1951 Studebaker Champion, which was restored during the show.

Visitors shared Stan Reynolds’ passion for collecting by checking out his most significant finds.

This exhibition introduced Collections Storage Facility “Behind the Scenes” Tours and White Glove Tours, where visitors don the white gloves and follow their tour guide to explore the 1920 Canadian Tractor, 1947 Grey Gull, 1912 Hupp-Yeats Electric Coach and 1942 Hawker Hurricane. Further activities included the Are You a Canadian Picker? self-guided treasure hunt, Farm House Play Zone featuring toys spanning Stan’s lifetime, Craft Station thaumatrope craft, “Be a Picker” activity, Starlight Drive-In classic cartoon shorts from 1935-1956, and a Play Zone where visitors could build a puzzle of the Hawker Hurricane or design and colour their Nose Art. Two films about Stan Reynolds were shown in the Theatre.

This Honda motorcycle display was all about the bikes! With more than 40 motorcycles, this display was a journey through the early years of Honda. From the rare to the commonplace, these motorcycles reflect the innovations that made the Honda lineup practical, comfortable, economical and reliable – oh yes, and fun!

The McLaughlin Story: 150 Years of Carriages, Cars & Canada Dry shared with visitors how this family of risk-takers shaped Canada’s transportation industry in this two-part exhibition: the Remington Carriage Museum told the first part of the story, and the Reynolds-Alberta Museum told the second part.

The six vehicles in this display had been donated to the Reynolds-Alberta Museum from the Roger Carry Collection.

Our Checkered Past: Racing in Alberta

This display of six vehicles offered a glimpse into Alberta’s racing history. The cars and motorcycles featured, combined with the stories of the people involved, and demonstrated how these individuals built a name for themselves and Alberta in the racing world.

More than 40 bikes told the story of technological development during this period, including the release of the world’s first superbike, the Honda CB750. 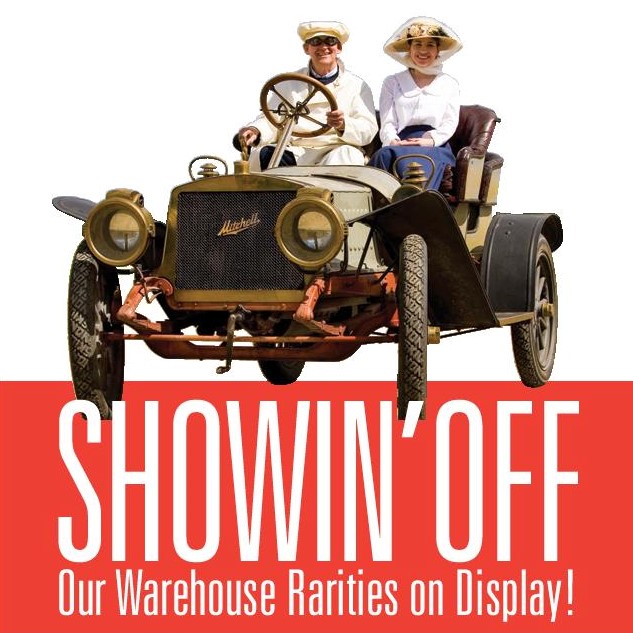 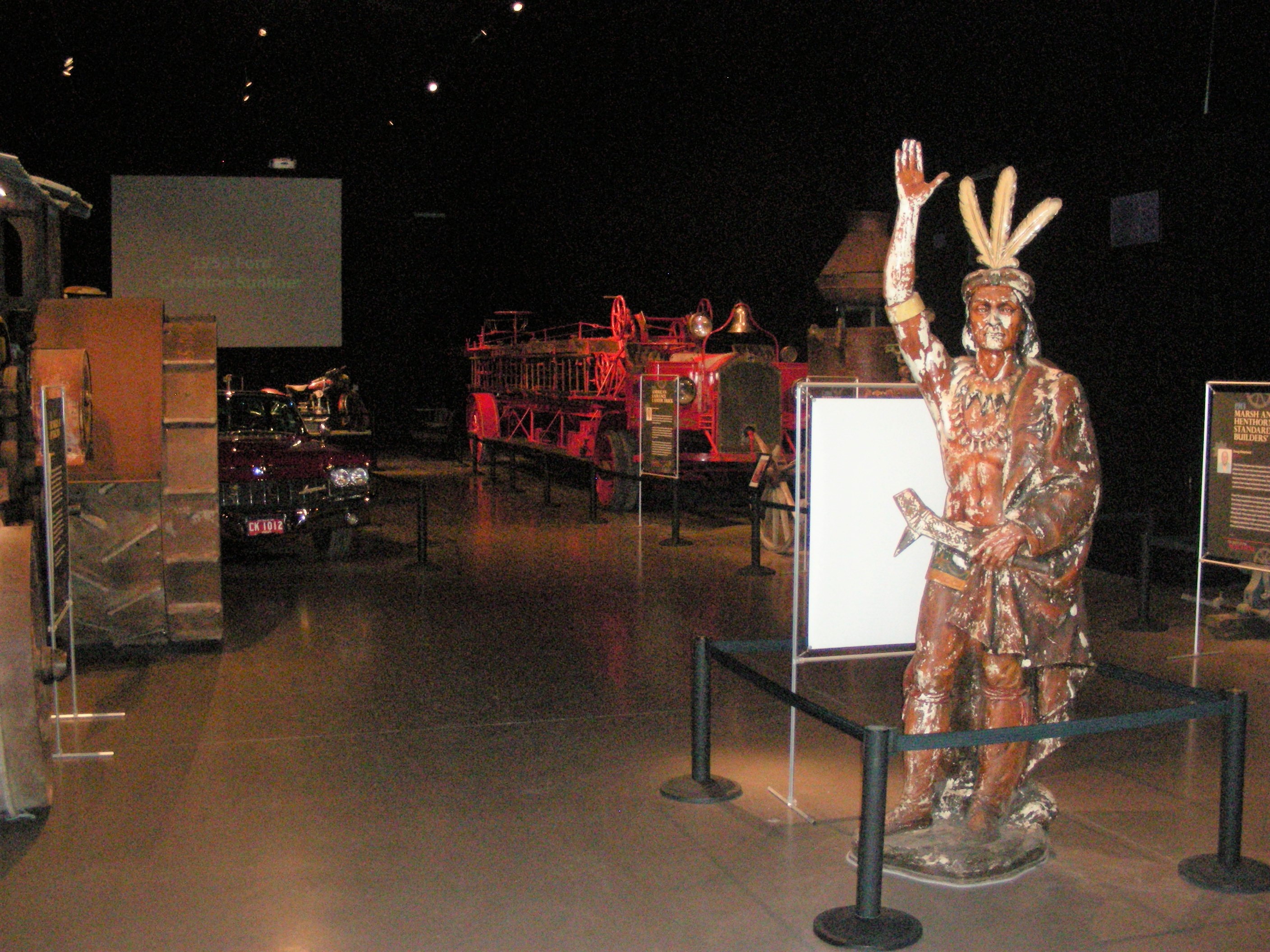 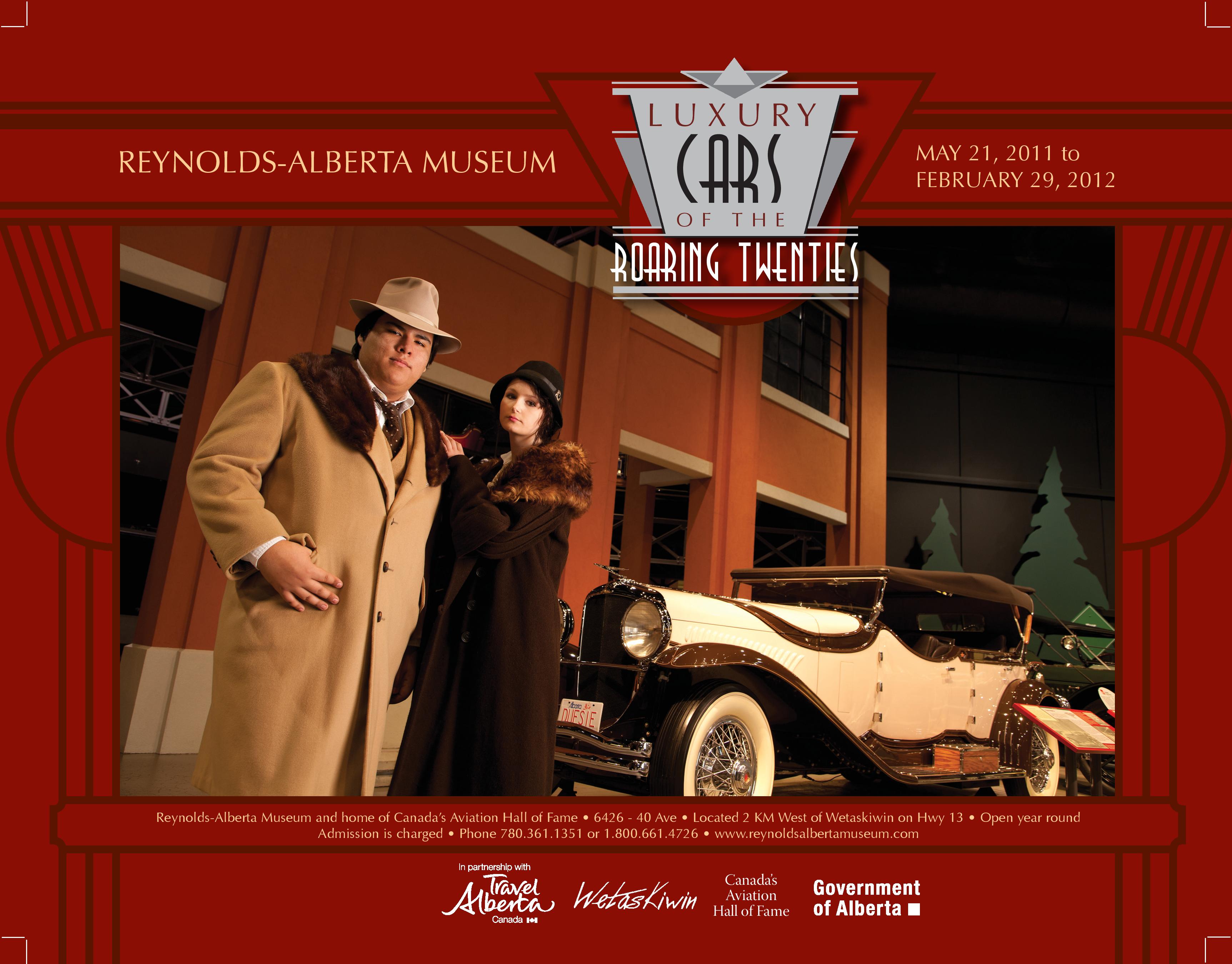 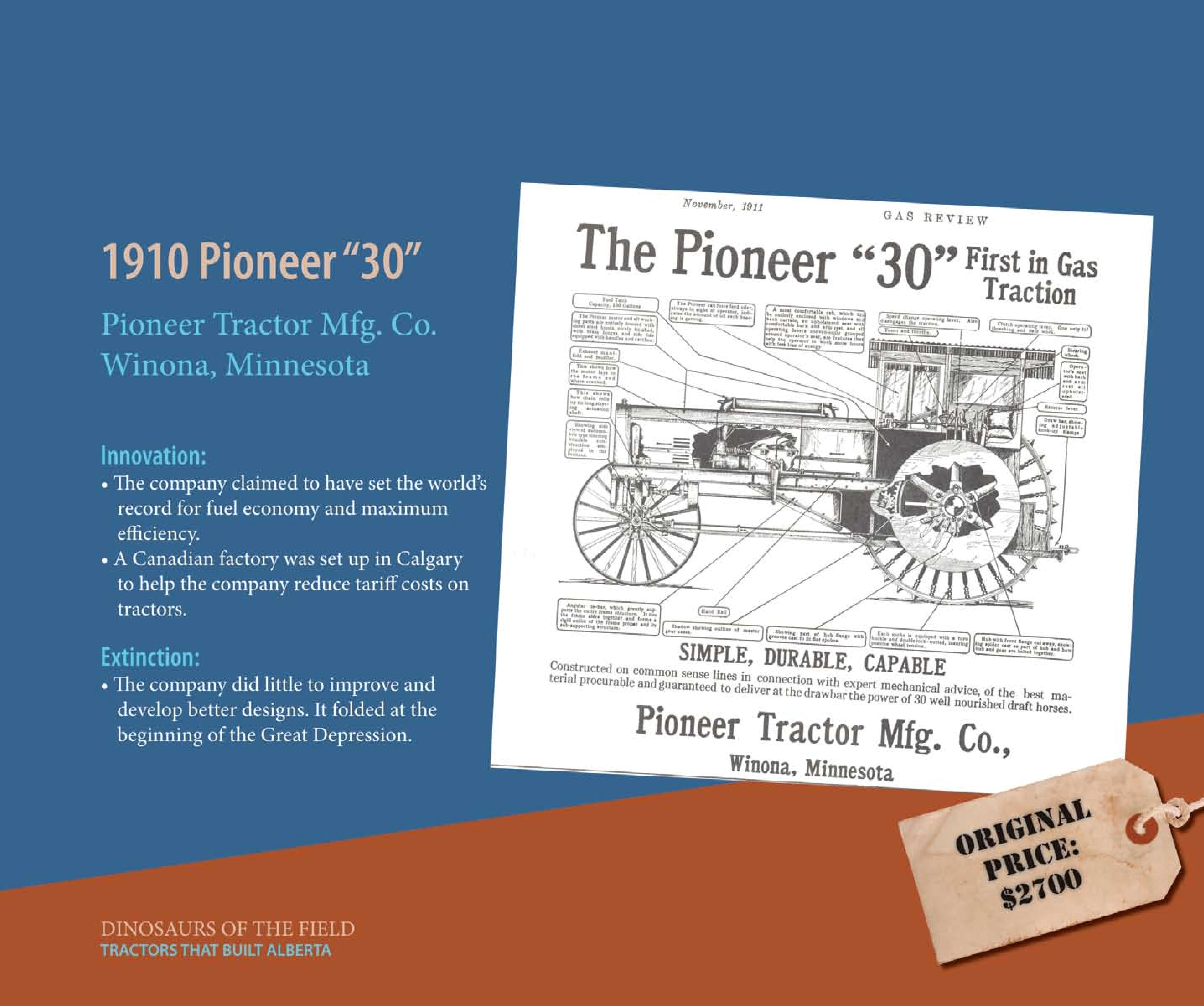 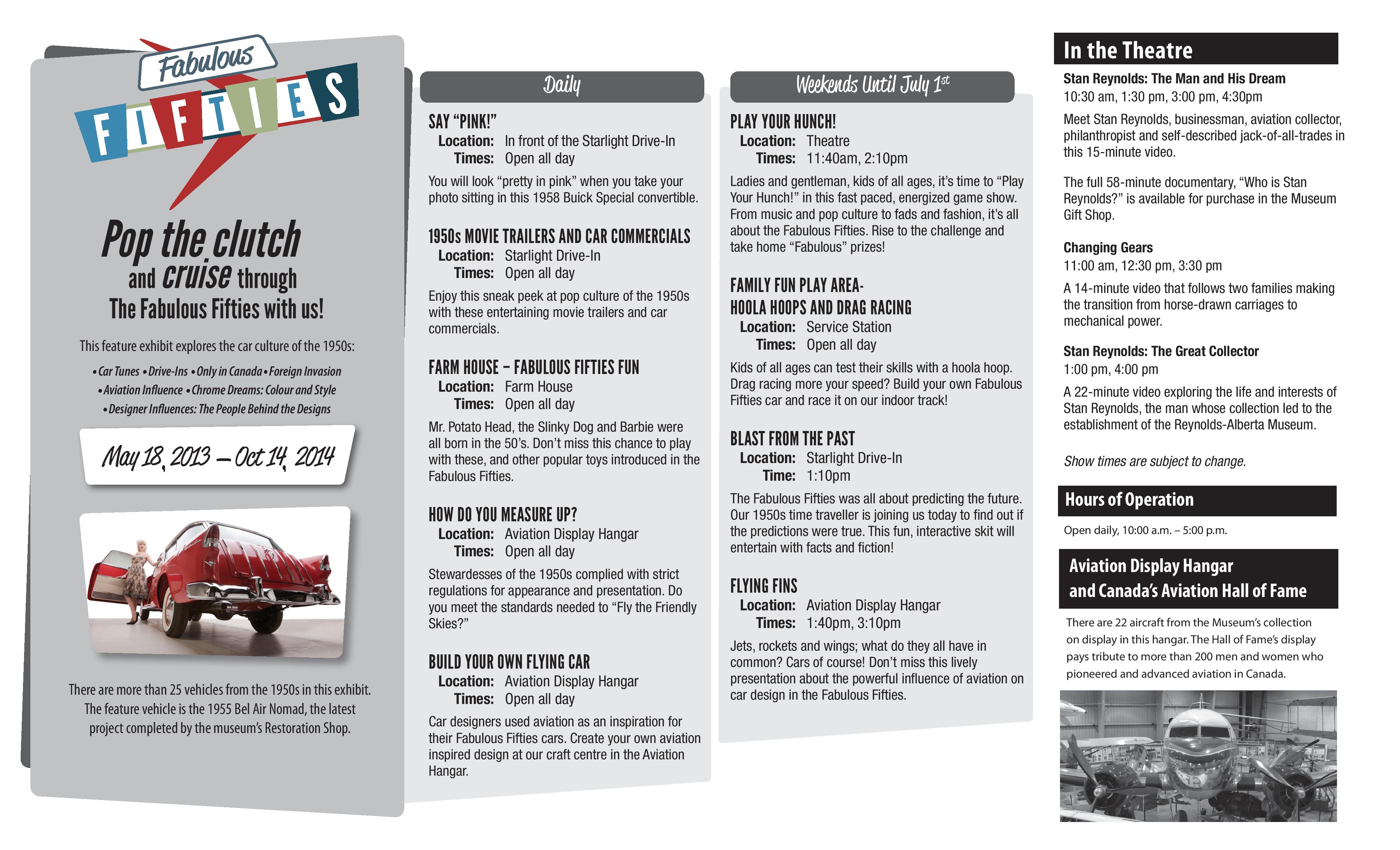